Recipe Testing – you win some, you lose some 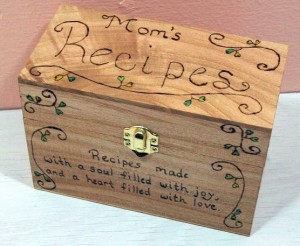 So I decided to try some recipes that I saw in my surfing this week… I must admit, I still do more surfing in good old-fashioned print than I do online, but nonetheless there is lots to sift through. I have taken to pulling pages from magazines to minimize the stock in my recipe bookcase, as after 25 years of surfing I would be suffocated otherwise 🙂

Fall always makes me want to cook, with all the goodness of harvest overflowing at the market stands. This last week I found a few fall dessert recipes and I got to making 3 of them. Two were a hit, one was a miss. I am posting the links to both here, and would love to hear comments – have you tried them,, or similar recipes? Did you like them? Do you read recipe reviews? Do you believe them? Do you trust recipes in print more than online, or vice versa?? When I started gathering recipes they were the ones I had tasted or had come from cooks I knew (my Mom, my Aunts, my best friend… you know how it used to work). One of the recipes I made was supposedly from a restaurant chef, and yet it was a total fail. How do I know in today’s remote world what to trust? Help!!

The first recipe I made came from a blog that is hosted through a shop I love in Seattle, World Spice Merchants. They have the most complete selection of spices and herbs I have ever seen under one roof, and their staff are extremely knowledgeable. Cardamom and Olive Oil Cake was the title. I was interested by the uniqueness of the recipe, and how it offered an “outside the box” combination of ingredients. I have posted on the blog asking if I made some error in the recipe preparation but I have not heard back.  (I printed the page and followed the listed directions explicitly, using the noted weights and not measurements in hopes of being the most accurate).  I’m still interested to try the recipe if there is something I missed, but the way it came out it’s not my cup of tea. I suppose I should have taken a picture but it was so sad – only 1 cm (1/2 inch) high, and pale and oily. Not nice.

The second recipe I made was a much more mainstream item but it looked good.

It came out of a Walmart magazine if you can believe it 🙂 Apple Coffee Cake. We live in the Okanagan and it’s harvest season so an apple cake seemed like just the thing. Full disclosure: I did tweak this one a bit by adding dried cranberries along with the apple. It’s not racy, but it works, even if you want to go more healthy and omit the caramel topping. (We almost always have homemade caramel sauce on hand so I used that for a few pieces and we ate the rest plain.)

The third recipe I also found online, through a search based on an ingredient.  We had a litre of buttermilk in the fridge that was nearing its expiry and so I thought it would be good to make some muffins using buttermilk. This recipe from Williams Sonoma looked to be the best reviewed of the ones I found. I tweaked this one too at the last minute, adding a few spoonsful of mixed peel just for fun. These were tasty – great breakfast muffins.

It’s coming up on Thanksgiving and I’m thankful I’m not testing recipes on my guests for the holiday. I’d hate to have something “not nice” come out of the oven and have to make excuses for friends and family. Having a husband as a chef that is a cardinal rule in our house – we test things at home and might use each other as guinea pigs, but people we invite get treated to tried and true recipes we know and love.

Do you have any cooking disappointments? What’s your philosophy on cooking a new recipe for guests? At the end of the day I suppose the most important thing is gathering people together around the table, so even if it’s to decide as a group that pizza needs to be ordered, well that’s OK too.

Happy Thanksgiving. May your kitchen be full of good smells and good company.