← The Taste of Memories
Freakish Spring  →

And the winner is… 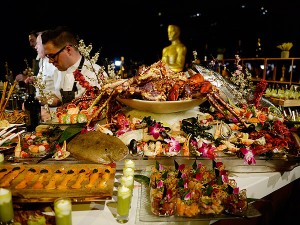 Time to get down to business. Sunday is Oscar night and I have appies to plan. This post will be a bit of streaming consciousness, as I figure out what will work this year. You see, in a household where movies are such a lynch pin, Oscar night is a great opportunity to honour that.

Setting aside the politics of the broadcast, we join in the festivities and do our best to honour the movies we enjoyed through the past year, whether they are on the nominations list or not. Our food theme works to coincide somehow with the movies. So let’s begin with a recap of who’s up for Best Picture:

We can literally go all over the map this year – movies that take place in the northern and southern United States, west coast, east coast and south coast, in Europe and India, involving African American and Caucasian culture. I suppose I could even interpret what aliens might eat. Ooh, the adventure of it all!

So, sticking with alphabetical order, here is my brainstorm…

ARRIVAL – something ethereal, perhaps, to go along with the theme of other-worldly creatures… like a meringue!

FENCES – this one is easy, if you saw the film. More than a few sandwiches are consumed in this movie. Middle class sustenance at its best.

HACKSAW RIDGE – since this is a war film, I thought a play on rations would be fun – how about a homemade chocolate “bar”?

HELL OR HIGH WATER – I could go with biscuits to play on the good old south setting, but I’d rather have fun with the title – hot wings it is.

HIDDEN FIGURES – let’s take from the church picnic and riff on those flavours – no fried chicken needed, but sweet potato cubes wrapped in bacon are good comfort food.

LA LA LAND – I can’t help it, I have to do some fish tacos. Sorry, Ryan Gosling.

LION – more bold flavours to represent the characters in this film. I have a wonderful curry yogurt dip that will be nice with some veggies.

MANCHESTER BY THE SEA – here’s the chance to add some kind of seafood to the menu.  A lobsgter roll would be good, but we already have fish tacos. Some garlic butter prawns would be lovely, though.

There we have it – a menu. Nine nibbles should keep us satiated. We still need beverages though, and there are some other films I want to recognize from 2016.

THE JUNGLE BOOK – not a new film, but newly done. The animated Disney version was one of my favourites as a kid, so a coconut cocktail is in order.

DOCTOR STRANGE, DEADPOOL, FANTASTIC BEASTS AND WHERE TO FIND THEM – all of these films offered exotic and fantastic effects and storylines. Here are a few colourful drink ideas:

We have the makings of a good party here. I have some work to do to get ready, but I’m looking forward to a fun evening. I may even dust off something fancy to make it official.

You might think I’ve gone off my rocker, doing so much for such a superficial event. Consider it more of a serious effort to have a lot of fun. Everyone will be a winner around our table, no matter what Jimmy Kimmel does.

our outfits one year at an Oscar party with friends, James Bond style

← The Taste of Memories
Freakish Spring  →