Food You Want to Eat Naked

Okay, that got your attention, didn’t it? The expression was one used by a friend on our recent trip to Vegas, where we enjoyed a number of meals that were absolutely wonderful. I think what she meant to convey was that feeling you have when something is so close to perfect it makes you hold your breath. There is a euphoria that comes over you as you soak in the experience. I’ll try to show you what I mean with my next few posts. I will start with the classic foodie “wow” and then proceed with other special experiences.

One night we booked at a restaurant owned by a chef my husband has followed since he started working in kitchens. For 30 years Martin has been looking through Joel Robuchon’s cookbooks and following his restaurant endeavours. Of course, Chef Robuchon was not in the kitchen the night we were there, but his touch was in every dish. A kitchen that arranges salad leaves with tweezers is not your everyday kind of place.

We really wanted to sample a range of items, so we booked at L’Atelier, where the a la carte menu is larger.The kitchen is open so that you can see much of the work as it happens. There is also the potential to spend a little bit less money, although this is not a cheap evening. But then like I said, we don’t eat like this every day!

We all chose a few courses, and decided to have wine with dinner. As we sat marveling at the room with all its food displays, we truly felt in the presence of greatness. The sense of anticipation was exciting. 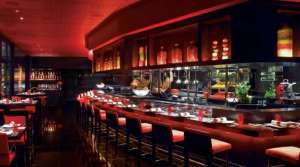 They set the tone with an “amuse bouche” and boy, was this first taste amusing! A parfait with foie gras and milk foam. Not for the faint at heart, certainly, but that’s one of the reasons we work out, after all.

My first course was “Soy glazed kampachi with endive salad and light mustard dressing”. Kampachi, or kingfish, is a beautifully tender and flaky white fish. The glaze was perfectly balanced with the dressing in the salad, both providing intense flavours to lift the more delicate fish and salad but not overpower them.

Martin had a classic dish, “Traditionally poached chilled duck foie gras”. It was served simply with a few toast points that were perfectly crisped.

Such decadence is almost enough to make one feel guilty, it’s so enjoyable…At least with your clothes on! But we had only just begun.

We went on to our second courses, and our friends had similar moans of delight with their dishes. How could pork chops be so delectable? Martin’s Crispy langoustine fritters with basil pesto” was ethereal they were so crispy. I had “veal sweetbread with fresh laurel and stuffed romaine lettuce”… yes, stuffed lettuce! I adore sweetbreads, and they are not an item on many menus. They were crispy on the outside and deliciously melt-in-my-mouth rich and smooth on the inside. The lettuce had a complimentary savoury flavour to it, I believe created by the foam they had made for it. I was in heaven.

But there was still more. The service team would be gliding back in to deliver more delights. They were practically invisible until we needed them, and their knowledge of the food was impeccable.

For the last savoury course, I chose “Caramelized quail stuffed with foie gras served with mashed potato”. Martin had “Maine lobster salad with a sherry vinegar dressing”. Our friends enjoyed a sea bass in a coconut curry (poured over the fish at the table, enveloping us all in its exotic aroma), and more foie gras (why not!) My quail was exquisite, delicate and rich at the same time with the foie gras stuffing and the potatoes that were whipped within an inch of their life. I felt a bit like Alice in Wonderland, eating this miniature dish. Martin’s lobster was prepared “a la minute”; you could practically smell the sea air. We hummed as we ate, we were so contented. 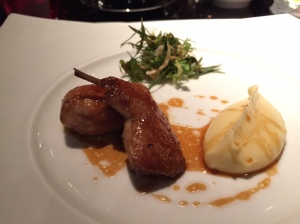 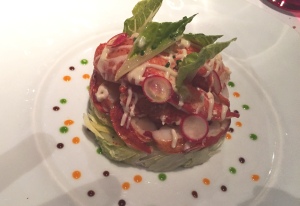 Of course, I could not leave without having dessert. And really, at such a place, why not order the souffle? “Green chartreuse soufflé, pistachio cream” was the description on the menu. I was completely intrigued. It is prepared to order, so we sipped the last of our wine as it cooked, and then had just started stirring our cappuccinos as it arrived, like a piece of art to a museum exhibition. The ice cream was in a frozen ceramic egg, and the souffle was still rising as it arrived I’m sure. We all gasped in awe as it was set down.

I took the first bite of souffle, and drifted away on a cloud with the elegant texture and subtle liqueur flavours in my mouth. The ice cream was an exciting contrast to taste, being richer and cold versus hot. I felt as though I had just watched the grand finale at a Broadway show. I was completely satiated.

We spent hundreds of dollars for dinner that night, and it was worth every penny. It’s not something we do often, but that’s okay, because the memories last a lifetime. To share the evening with friends who were equally as interested and impressed with the experience was also a real treat.

Cheers to the fellow foodies out there who love this kind of stuff. For anyone who thinks I’m a bit nuts, well I hope you can appreciate this as an enthusiastic hobby, just like a football fan or a keen scrap-booker 🙂